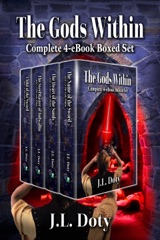 The Gods Within Boxed Set

Praise for The Gods Within:

Rat is no ordinary Thief

A small feral child, he steals what he can to feed the gnawing hunger in his gut, though nothing can satisfy the hunger in his soul.

But he has a special talent that the wizards and witches of the clans covet, so Clan Elhiyne abducts him and gives him the name Morgin.

Can he escape the scheming of the clan's calculating and manipulative leader, the matriarchal old witch Olivia?

And as he grows into manhood, can he survive the inter-clan rivalries, and the hatred that smolders between Olivia and her arch-enemy Valso, leader of Clan Decouix?

A can't-put-it-down read. Pick it up today!

No rating
No Entry
© 2020 Chartoo. Available on iTunes. Product prices and availability are accurate as of 17/05/2021, 05:18:35 and are subject to change. Any price and availability information displayed on iTunes at the time of purchase will apply to the purchase of this product. Apple, the Apple logo, Apple Music, iPad, iPhone, iPod, iPod touch, iTunes, iTunes Store, iTunes U, Mac, and OS X are trademarks of Apple Inc., registered in the U.S. and other countries. Apple Books, App Store, and Mac App Store are service marks of Apple Inc. IOS is a trademark or registered trademark of Cisco in the U.S. and other countries and is used under license. QR Code is a registered trademark of Denso Wave Incorporated. All other trademarks, logos, and copyrights are property of their respective owners.
DesktopTabletMobile
Improve this translation
Preview provided courtesy of iTunes
Preview provided courtesy of iTunes