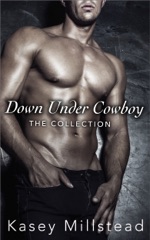 Down Under Cowboy - The Collection

The first 4 books of the #1 Bestselling Down Under Cowboy series!
Cowboy Town
Sky Cowboy
Cowboy Dreams
Tatted Cowboy
Ever since her parents passed away in a tragic car accident, Eden Cross has been living a quiet, stable and predictable life in inner Sydney – the total opposite of her carefree, relaxed, happy-go-lucky past. Her parents passing and the fact she’s an only child meant Eden was left with her best friend, Jules and Matt, her boyfriend of three years as her only family. That was until she discovered something about Matt that would turn her life upside down. Eden leaves Sydney in a hurry and begins an adventure that takes her across four Australian states before she lands in Pine Creek, Northern Territory.
Jackson Henley has lived in Pine Creek his entire life. He runs a massive cattle and cropping station with his twin brother, Jeremy, which they inherited when their parents retired. He’s had a bad experience with relationships courtesy of The Bitch - Dannika, so lately he’s preferred to play the field. That is, until he comes face to face with the stunning brunette beauty who’s behind the bar at the Cow and Calf. The problem is, she won’t tell him her name, she won’t give him the time of day, and she won’t give him a chance to prove himself.
What’s it going to take for Eden to give Jackson a chance? Does he have the patience to even bother fighting for her? How will he handle the competition?
In the end, will Jackson have what it takes to convince Eden to start living again, instead of just existing?

36 Ratings
Omg I just finished the collection and I loved the whole lot I carnt wait to see what else you have written, keep up the great work and I'll keep reading thank you Karen xx
I really enjoyed each and every story in the Down Under Cowboy series - I couldn't put the books down! As soon as I finished one story, I continued to the next! Highly recommend it.
Have truly enjoyed this Aussie based series!!! There's nothing hotter than hard working, women adoring, gentlemen like strong men... Drool worthy!!!
An Aussie book awesome read. Loved it.
I throughly enjoyed each story in this series. I loved characters. I couldn't put down & never wanted it to end ❤️❤️ first time reader of this author & will for sure check her other books our. 📖❤️❤️
Just wonderful. This book is perfect for a read on a rainy day or if you want a love story with some hunky men! Could not put it down from start to finish! Absolutely loved that it was set in Australia and that each of the stories were well paced.
Book 3 my absolute fav jules is the best character so raw and truthful love the series 48 hours and 4 books... Who needs sleep :)
...with all of these characters. What's not to
like about Pine Creek, Gran, Skip and the gang. Looking forward to the next instalment - Zeke and Sienna. :)
© 2021 Chartoo. Available on iTunes. Product prices and availability are accurate as of 12/06/2021, 17:37:08 and are subject to change. Any price and availability information displayed on iTunes at the time of purchase will apply to the purchase of this product. Apple, the Apple logo, Apple Music, iPad, iPhone, iPod, iPod touch, iTunes, iTunes Store, iTunes U, Mac, and OS X are trademarks of Apple Inc., registered in the U.S. and other countries. Apple Books, App Store, and Mac App Store are service marks of Apple Inc. IOS is a trademark or registered trademark of Cisco in the U.S. and other countries and is used under license. QR Code is a registered trademark of Denso Wave Incorporated. All other trademarks, logos, and copyrights are property of their respective owners.
DesktopTabletMobile
Improve this translation
Preview provided courtesy of iTunes
Preview provided courtesy of iTunes