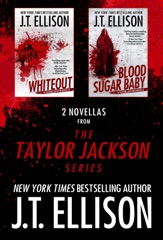 2 Novellas from the Taylor Jackson Series

Taylor Jackson is back! Join the fearless Nashville Homicide Lieutenant and familiar faces in these two novellas as Taylor tackles two of the most intriguing cases of her career.

BLOOD SUGAR BABY
Metro Nashville Homicide Lieutenant Taylor Jackson is none too happy when the body of a high-profile Nashvillian turns up after a protest. But when her detectives find another body with the same, mysterious wounds, it’s clear she has a psychopath on her hands—and records show he’s been on the move, leaving chaos in his wake. Will this killer slip through Taylor’s grasp, as he has slipped through grasps of so many, for so long?
"Blood Sugar Baby" was previously published in the three-part novella SLICES OF NIGHT with Erica Spindler and Alex Kava.
WHITEOUT
Metro Nashville Homicide Lieutenant Taylor Jackson has reluctantly agreed to take the place of her fiancé, FBI profiler John Baldwin, as a presenter at the annual Freedom Conference, a foreign intelligence initiative attended by the best in the business of "clandestine services." Then a blizzard effectively isolates their hotel on Chesapeake Bay: no power, no generators, and no possibility of outside help. When two guests go missing, and one of them is found dead in his room, Taylor discovers an assassin amongst the spies—one with a deadly score to settle.
"Whiteout" was previously published in the three-part novella STORM SEASON with Erica Spindler and Alex Kava.

No rating
No Entry
© 2020 Chartoo. Available on iTunes. Product prices and availability are accurate as of 20/05/2021, 05:18:15 and are subject to change. Any price and availability information displayed on iTunes at the time of purchase will apply to the purchase of this product. Apple, the Apple logo, Apple Music, iPad, iPhone, iPod, iPod touch, iTunes, iTunes Store, iTunes U, Mac, and OS X are trademarks of Apple Inc., registered in the U.S. and other countries. Apple Books, App Store, and Mac App Store are service marks of Apple Inc. IOS is a trademark or registered trademark of Cisco in the U.S. and other countries and is used under license. QR Code is a registered trademark of Denso Wave Incorporated. All other trademarks, logos, and copyrights are property of their respective owners.
DesktopTabletMobile
Improve this translation
Preview provided courtesy of iTunes
Preview provided courtesy of iTunes